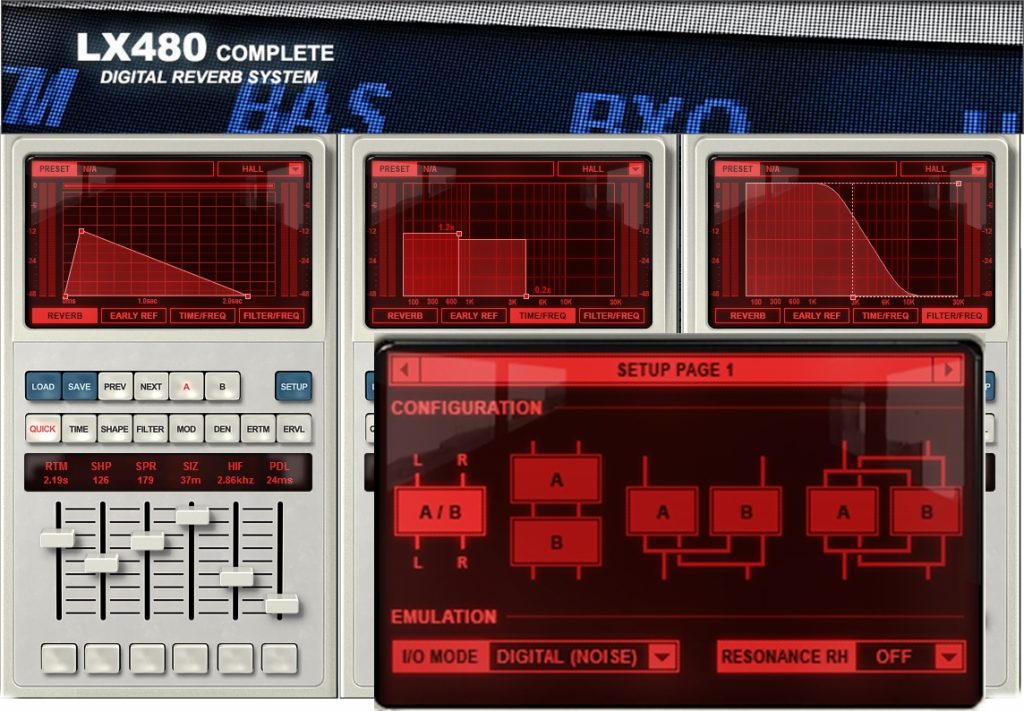 For over two decades, the Lexicon 480L Digital Effects System* has been the standard by which all other signal processors are measured. The Lexicon 480L* remains a popular choice among top producers for the most demanding tasks. Even today the Lexicon 480L* is widely considered as one of the best-sounding reverbs ever built.
When creating the first entry for their own product line, Relab Development decided to create the most accurate emulation that could replace this legendary hardware reverb. The LX480 plugin goes far beyond emulation by using the exact same reverb technology and introducing higher density modes and functions not found on the original.
The LX480 will set the new standard for reverb plugins in the future. Download the demo and listen!
Features:
• Faithfull recreation of the reverb algorithms from the Lexicon 480L*
– Random Hall
– Hall
– Room / Plate
– Random Ambience
– Twin Delays
• Modeled input and output stages – Everything is modeled from internal clipping to
quirks in the feedback loops
• Additional exclusive features and functions not found on the original
– Continuous controls
– Flexible and additional filter structures for better sound shaping
– More ER delay lines
– Stereo manipulation
– 88.2Khz and 96Khz support
• Improved algorithms with higher density than found on any other reverb plugin (and the original)
• Quick controls and customizable display
You can select between 4 routing configurations with different algorithms in each engine for
extremely wide reverberation :
• Single
• Cascade
• Mono Split
• Stereo Split

The display is completely customizable with sliders for HUE, color saturation, brightness, reflection amount and back lighting. The
reflection type and background graphic can be modified.
* Lexicon, 480L Digital Effects System and 480L are trademarks of Lexicon Inc. which are in no way associated or affiliated with Relab Development.
These trademarks of other manufacturers are used solely to identify the products of those manufacturers whose sounds were studied during the
development of the plugin.

If you spend ten minutes on a random radio station anywhere in the world, the likelihood that you catch one of Hugh Padgham’s productions is strikingly

The Area 33 SDX brings together parts of the original Drumkit From Hell team: Meshuggah guitarist Fredrik Thordendal and producer/engineer/mixer Daniel Bergstrand (Behemoth, In Flames, Dimmu Borgir). In this joint venture

In addition to a massive library of raw sound material, Superior Drummer 3 introduces a unique design a streamlined workflow and countless features for powerful

CH-OCTA is the first instrument of the new MEGA STRUCTURE series. OCTA is a musical workhorse that offers truly versatile solo or 8 channel musical

Band-in-a-Box is an intelligent automatic accompaniment program for your multimedia computer. You can hear and play along to many song ideas and go from “nothing” to

SPAN Plus provides you with a very flexible “mode” system which you can use to setup your spectrum analyzer preferences.  You may specify Fourier block

Overview of Arturia Analog Lab 5 for macOS This program gives you streamlined access to 6500+ hottest presets from our award-winning V Collection. Featuring sounds

Ample Guitar RB aim to bring a Rickenbacker 330 electric guitar sound to your studio, It is suited for 60 – 80’s British Pop. Sampling:

iZotope – Introduces an intelligent mixing plugin – Neutron. The plugin includes the first Track Assistant and Masking Meter technologies in this area. Focused on